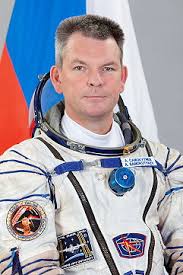 Aleksandr Mikhailovich Samokutyayev (Александр Михайлович Самокутяев – born 13 March 1970 in Penza / Penza Oblast / Russian SFSR) is a former Russian cosmonaut. Samokutyayev served as a Flight Engineer for the International Space Station (ISS) long duration Expedition 27/28 missions. He also served as the Soyuz TMA-21 commander. He most recently served on the Soyuz TMA-14M Expedition 41/42 crew aboard the ISS. He was hired as a cosmonaut in the summer of 2003.