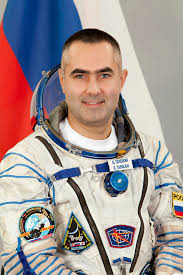 Evgeny Igorevich Tarelkin (Russian: Евгений Игоревич Тарелкин; born December 29, 1974) is a Russian cosmonaut. He was selected as part of the TsPK-13 group in 2003. He served in the Air Force until his selection as a cosmonaut as part of the TsPK-13 selection group in 2003, completing basic training in 2005. Tarelkin made his first flight into space in October 2012 as a member of the Soyuz TMA-06M crew, during which he spent six months aboard the International Space Station as part of the Expedition 33/34 crews and returned on March 16, 2013.