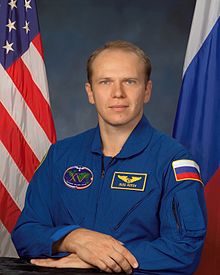 Oleg Valeriyevich Kotov (Russian: Олег Валериевич Котов) was born on October 27, 1965, in Simferopol, Crimean oblast in the Ukrainian SSR. After a career as a physician assigned to the Soviet space program, he joined the Russian cosmonaut corps. He has flown two long duration spaceflights on the International Space Station logging just short of a year in space. Most recently, Kotov flew on the Soyuz TMA-10M/Expedition 37/Expedition 38 long duration spaceflight, from September 2013 until March 2014.