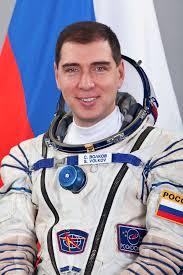 Sergey Aleksandrovich Volkov is a retired Russian cosmonaut and engineer. He was a member of three missions to the International Space Station, spending more than a year in total in space. During his missions he did four spacewalks lasting more than 23 hours in total. Volkov retired from the Cosmonaut group in February 2017.