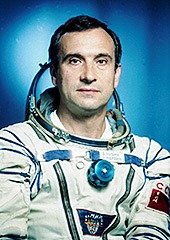 Valeri Vladimirovich Polyakov (Russian: Валерий Владимирович Поляков, born Valeri Ivanovich Korshunov on April 27, 1942) is a former Russian cosmonaut. He is the holder of the record for the longest single stay in space in human history, staying aboard the Mir space station for more than 14 months (437 days 18 hours) during one trip. His combined space experience is more than 22 months. Selected as a cosmonaut in 1972, Polyakov made his first flight into space aboard Soyuz TM-6 in 1988. He returned to Earth 240 days later aboard TM-7. Polyakov completed his second flight into space in 1994–1995, spending 437 days in space between launching on Soyuz TM-18 and landing on TM-20, setting the record for the longest time continuously spent in space by an individual in human history.