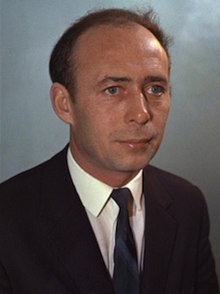 Viktor Ivanovich Patsayev (Russian: Ви́ктор Ива́нович Паца́ев; 19 June 1933 – 30 June 1971) was a Soviet cosmonaut who flew on the Soyuz 11 mission and was part of the second crew to die during a space flight. On board the space station Salyut 1 he operated the Orion 1 Space Observatory (see Orion 1 and Orion 2 Space Observatories), he became the first man to operate a telescope outside the Earth's atmosphere. After a normal re-entry, the capsule was opened and the crew was found dead. It was discovered that a valve had opened just prior to leaving orbit that had allowed the capsule's atmosphere to vent away into space, suffocating the crew. One of Patsayev's hands was found to be bruised, and he may have been trying to shut the valve manually at the time he lost consciousness.