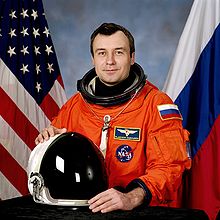 Vladimir Nikolayevich Dezhurov (Russian: Влади́мир Никола́евич Дежу́ров; born July 30, 1962) is a former cosmonaut who resides in Star City, Moscow. He is a veteran of two spaceflights, to the Mir and International Space Stations. During his career, Dezhurov also conducted nine spacewalks before his retirement on July 12, 2004.