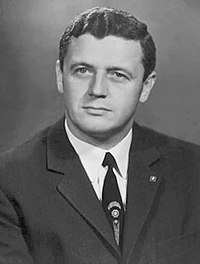 Vladislav Nikolayevich Volkov (Russian: Владисла́в Никола́евич Во́лков; November 23, 1935 – June 30, 1971) was a Soviet cosmonaut who flew on the Soyuz 7 and Soyuz 11 missions. The second mission terminated fatally. Volkov, on his second space mission in 1971, was assigned to Soyuz 11. The three cosmonauts on this flight spent 23 days on Salyut 1, the world's first space station. After three relatively placid weeks in orbit, however, Soyuz 11 became the second Soviet space flight to terminate fatally, after Soyuz 1. After a normal re-entry, the Soyuz 11 capsule was opened and the corpses of the three crew members were found inside. It was discovered that a valve had opened just prior to leaving orbit that had allowed the capsule's atmosphere to vent away into space, causing Volkov and his two flight companions to suffer fatal hypoxia as their cabin descended toward the earth's atmosphere.